Acquabella has unveiled its latest range of new products: a collection of products for the bathroom, including custom shower trays, original sinks, a unique bathtub and modular furniture.

The Spanish brand has surprised us this year with a variety of creations that offer a complete solution for the bathroom. True to its philosophy, Acquabella is providing consumers products with both daring and more minimalist designs, all of them produced in the highest quality and with the user’s experience in mind, who will feel surrounded by the comfort of Acquabella products.

Acquabella is strengthening its position as a leader in the manufacture of resin and mineral-filled shower trays with four new additions to the range: Natur Wave, Areia Slate Evo, Halo Slate and Unic Slate. 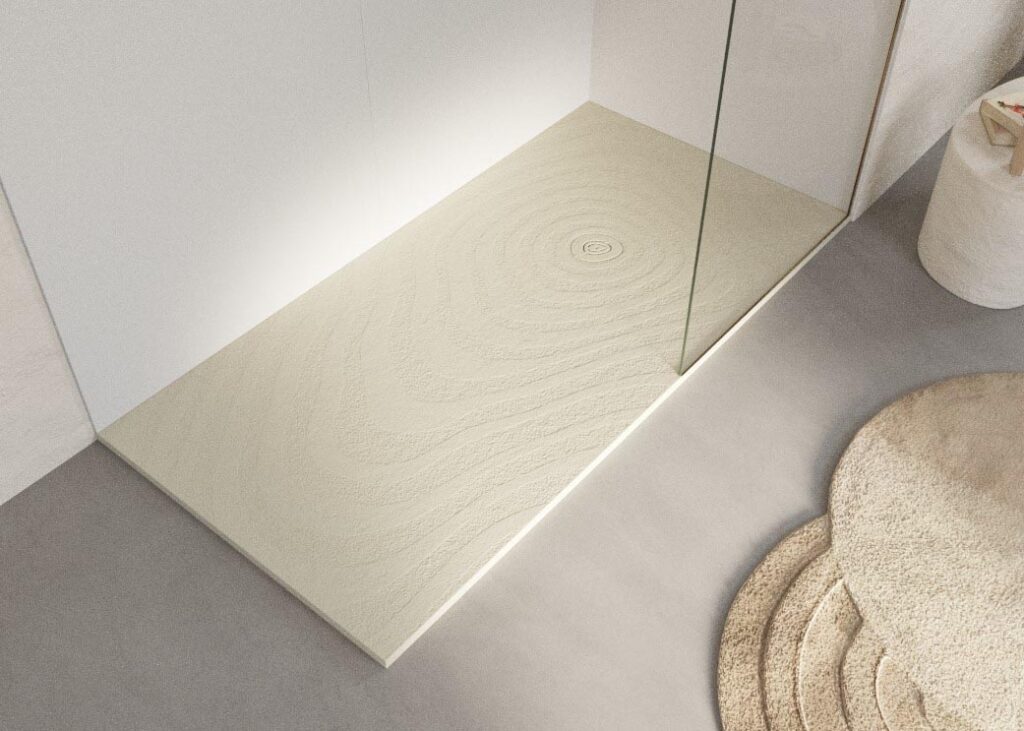 This resin and mineral-filled shower tray combines the most contemporary and daring design with the dynamism of nature. Inspired by the rings of a century-old tree and by the ripples that expand in water from a small drop, the Natur Wave shower tray forms concentric waves that gradually narrow, closing in an imperfectly circular grid. 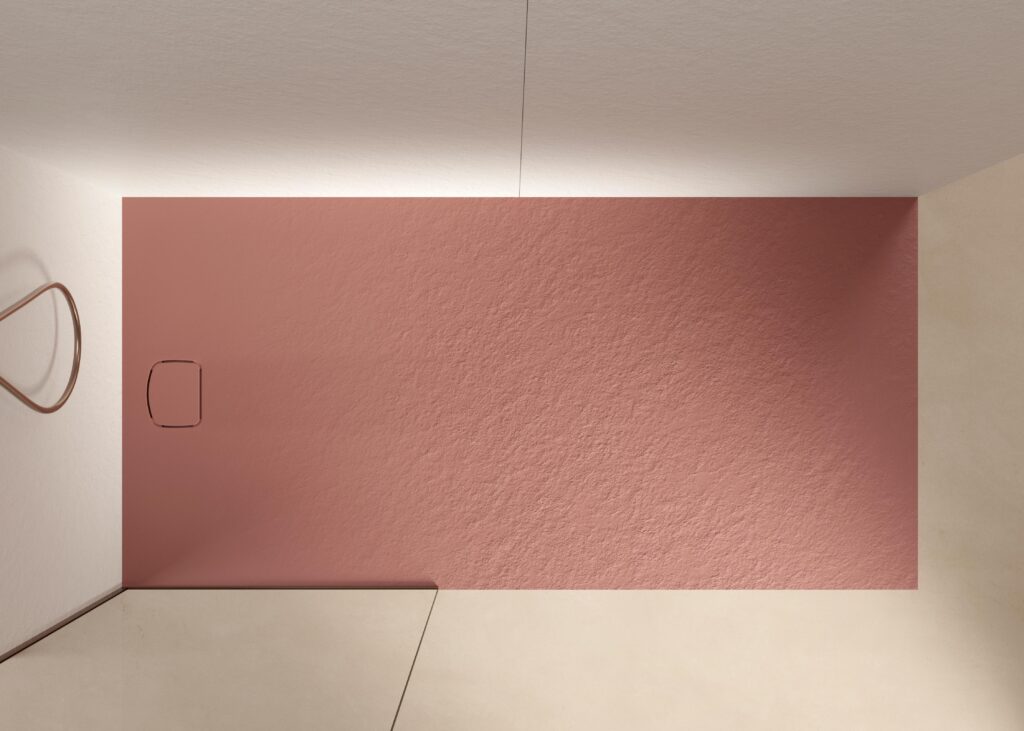 The Slate and Zero textures merge together in a smooth gradient to produce Slate Evo, a texture used to embellish the Areia shower tray model. Slate Evo is a tribute to the effect of the ocean’s waves on sand and rock, which smooth its surface. The base of the Areia shower tray starts with the well-known Slate texture, which progressively merges with the Zero texture until it reaches a grid of rounded angles and fits into the gentle slope of the tray. 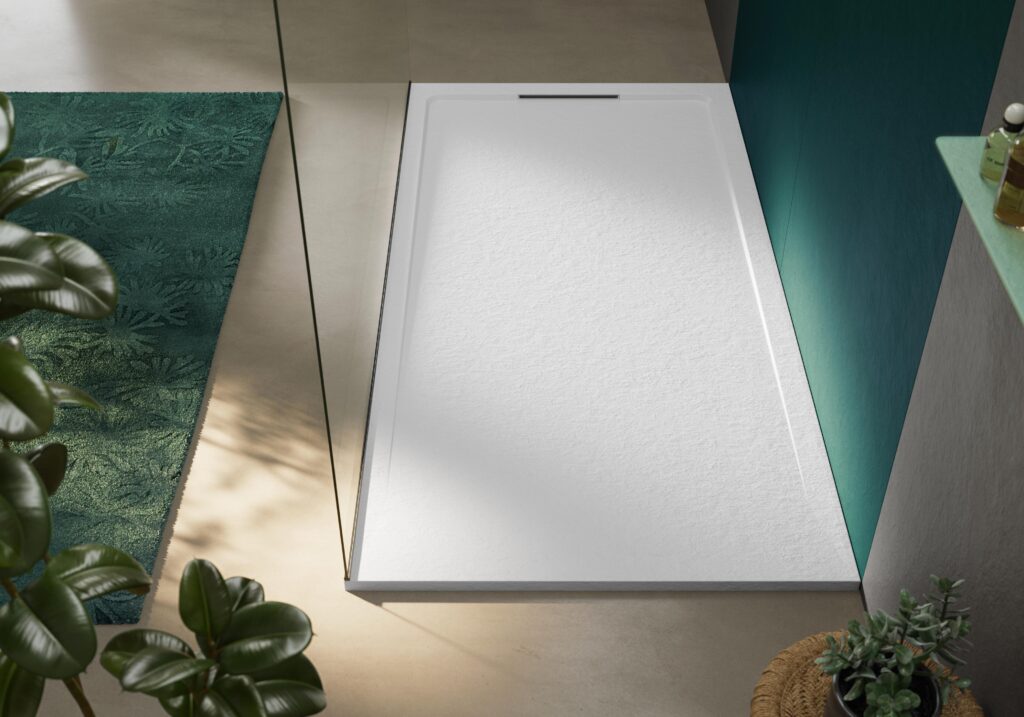 An elegant frame runs around part of the perimeter of the Halo Slate semi-framed shower tray, concealing an elongated grate that is capable of evacuating large quantities of water. The tray also includes the Slate texture, giving it a minimalist touch, while the drop of the frame is in the Zero texture. Little details that make all the difference. 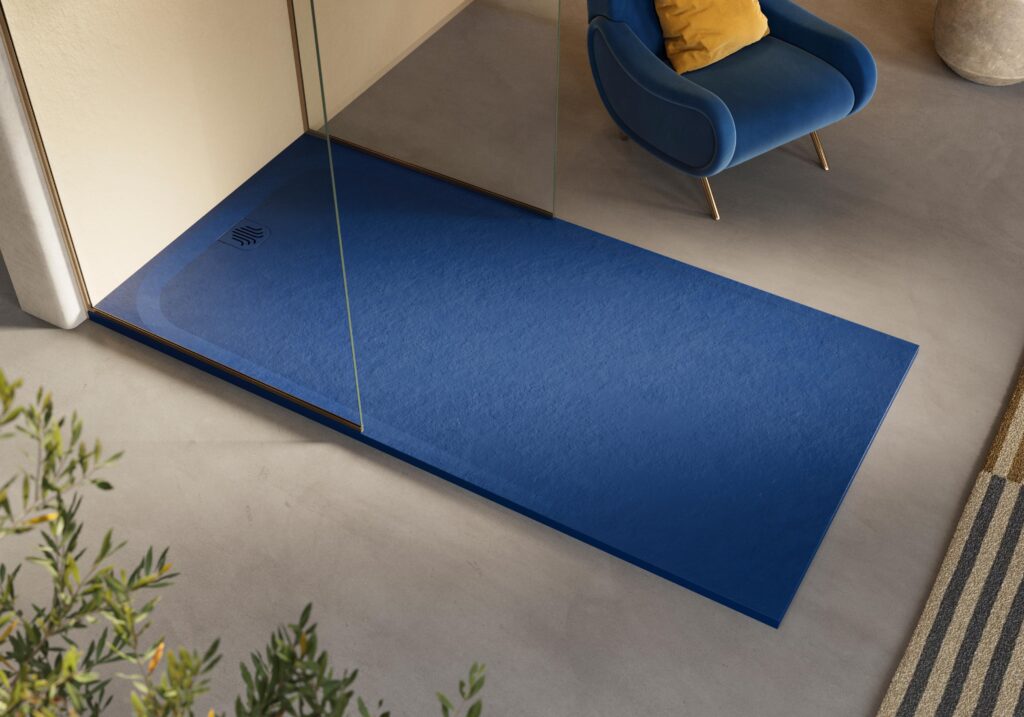 The Art Deco style of the 1920s has been revived in the Unic Slate custom shower tray. An elegant arch with gentle slopes frames the shower tray, which houses a grate, also with organic shapes, offering even more possibilities for customisation, as Acquabella has three different grate models to choose from: Deco, Dune and Drop. 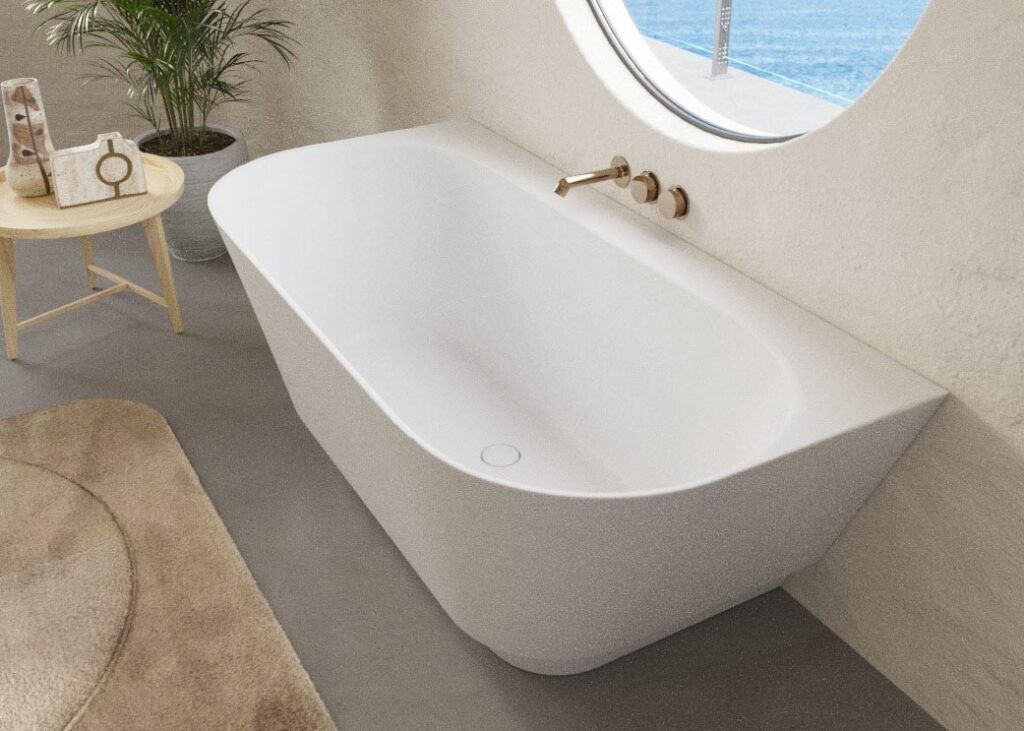 Acquabella’s Acquawhite collection has been extended with the new Voss semi freestanding bathtub. This soft-touch white bathtub widens at the top for exceptional comfort. It then becomes narrower at the base, producing an original design with the smallest details.

Aside from the shower tray or bathtub, the sink is the most important element in the bathroom, due to its visibility. Acquabella offers two options for this space, one more classic and one more modern. 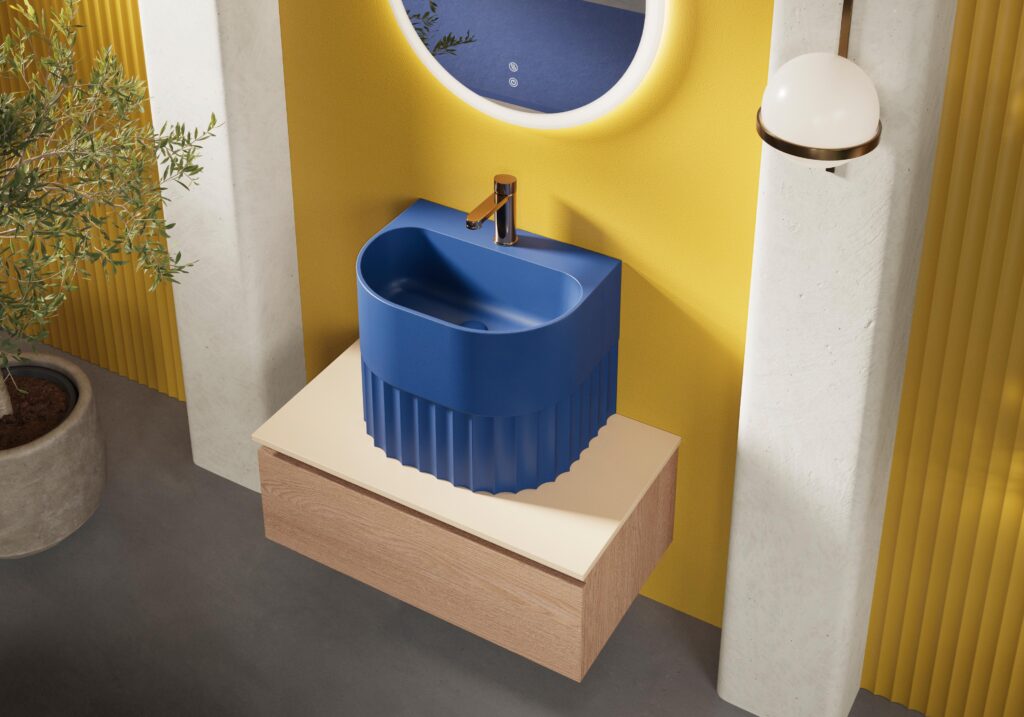 The Delia Zero tall sink boasts a contemporary design that is reminiscent of ancient Greece. It is a semi-totem sink that can be suspended on the wall, attached to a modern metal sink structure or placed on a bathroom cabinet. Its base is formed by waves that support the deep sink. All in the Zero texture and available in more than 2000 colours. 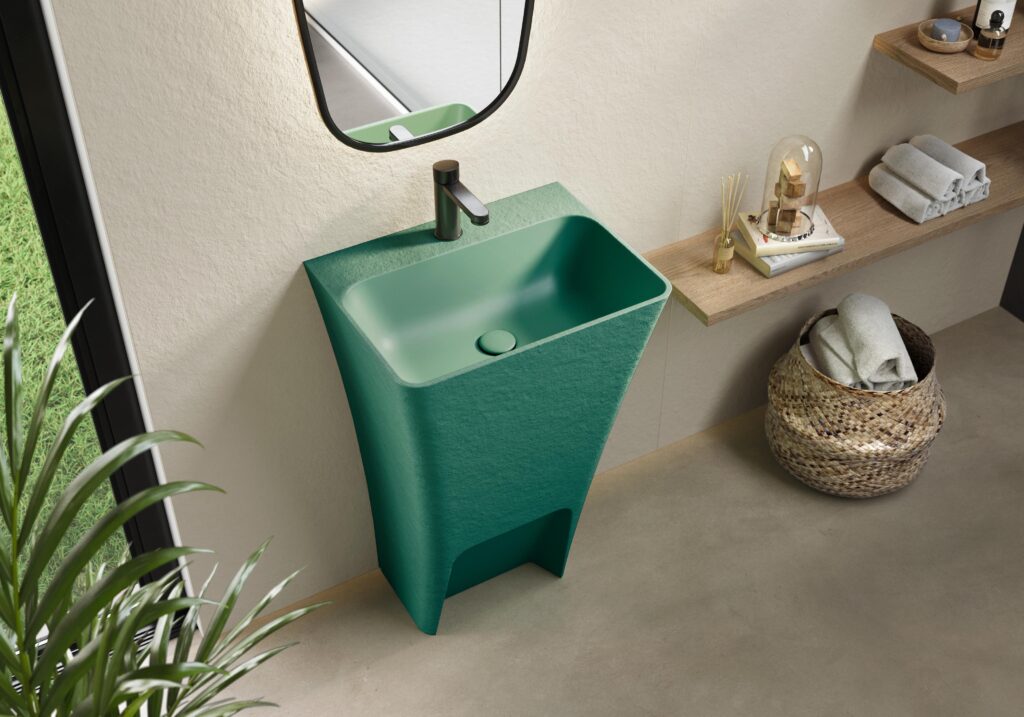 Acquabella presents the first free-standing sink on the market made of Akron®. A sculptural pedestal covered with the Slate texture, which narrows at the base, with a small arc in the Zero texture.

This is a semi-freestanding sink, which needs to be installed against a wall, and there is space to embed the tap in the resin basin itself.

Complete your bathroom with new products from Acquabella

In addition to the products that form the core of the Spanish brand, such as shower trays, bathtubs, panels, sinks and worktops, Acquabella also offers accessories to complete your bathroom.

If there’s one thing that comes in handy in a bathroom, it’s bathroom furniture. Artic is a modular piece of bathroom furniture that offers infinite combinations. It contains a drawer with ample storage space and is available in elm wood or white lacquered finishes. You can install a One, Integra or Infinity worktop on it.

The Delia sink structure is another of Acquabella’s new accessories, and it has been designed to support the sink that goes by the same name. It supports the Delia tall sink as if it were a museum piece, providing a modern and elegant yet practical touch, thanks to the Akron® shelf located at its base. 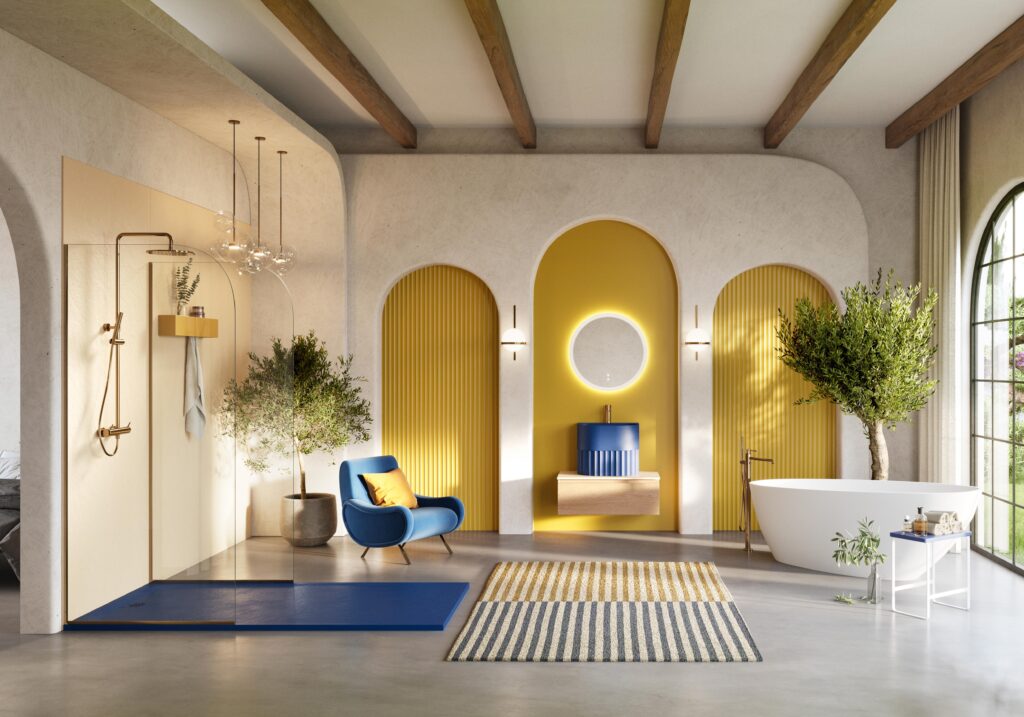 With all these products, Acquabella is welcoming 2023 with a host of new goals and an ever-expanding catalogue, without forgetting the quality of its products or services, which are reinforced thanks to the improvement processes that the brand is subjected to on a constant basis.